Can you add different types of buttons for different uses?

I was doing a garage opener, and when I got all done, I realized that the relay was always activated, not letting me use the regular garage button on the wall. The other type of garage opener used a button that activated the relay and then deactivated it, but this one does not and I have to press it twice to make the garage open, or close. I don’t now if Im explaining myself, If you want to I can upload a video showing the issue.

The video would be helpful

What are you trying to accomplish with Cayenne? Turning the relay on / off?

have connected the relay into an existing system were the signal to the opener is only pressed for a second a pulse,
And the button not a switch on the wall is the same ?

When I press the button, I want the relay to turn on and then off, with 1 click, On, half a second later Off. That’s what I need, And right now, I have to turn it on and off pressing the button two times. I’ll upload a video when I get home.

It is hard to explain, the video will help.

Maybe this is what you are looking for?

All of these sound like they’d be very useful. In regards to the OP, would it be possible to either add a time parameter to a trigger, or maybe even have “Timer” be an available “device” in the tool chain on the Cayenne side, where an event could trigger a timer to turn on, that then triggers another event when it times out. Ideally this could be set up as a one-shot or repeating event. For custom device drivers, I would like to see a Python API that could be used on the RasPi side to communi…

Hi, This is exactly what I am after as well. The option for a momentary switch (push button) rather than a toggle. I think other people have also been looking for similar.

It would also be cool to be able to have an input pin control the indication/illumination of the switch on app/dashboard.
Eg, you press the dashboard button/switch to trigger a relay (controlling a light). The dashboard switch then illuminates to say it’s on. This may not be true for a push button or if your using the relay as a two-way switch as an external switch may switch the light off. So it would be handy to have an option to enable an external (current or similar) sensor to display wether the light is actually on or not.
Hope that makes some sense?!?!?
Thanks

Welcome to the Cayenne community!

It would also be cool to be able to have an input pin control the indication/illumination of the switch on app/dashboard.

That would be like a widget in a widget, you would be getting confirmation feedback from the device to confirm operation-
light swich on + increase in luminosity = light on indicated
motor on + current sensed = motor running indicated
pump on + water flow = pump operation indicated

Have I got the idea?

Hi Ian,
Yeah I think you have it. As i see… lets imagine all switches on the app/desktop are off. When you press the switch on the app or desktop you might not necessarily be switching a light or a pump on if your Pi is operating a relay which is connected together with lets say a 3-way 230v switch (see pic). You may in fact be switching that pump/light off.
Which means you have to have the condition of the pump/light indicate from some external feedback sensor. As you say a current or luminosity sensor.

I’m looking at doing some home automation similar to this, I might use a latching relay so only want a momentary push button not a toggle.
Obviously as the light can be switched on from the manual house switch feedback that the light is on has to come from a sensor. 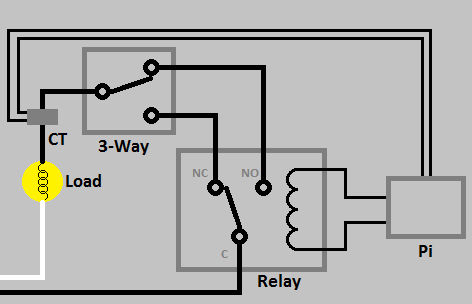 Would be great to see this functionality. In the meantime I’m loving Cayenne!

That’s exactly what i am on with I have about 10 lights to control each with a single or double switch (1 gang 2 way) so I’m having to add some intermediate switches so having some sort of information that feeds back would be cool.
But back on topic you can get relays with momentarily or timers I have one in the loft some were i will pull it out and take a pic. 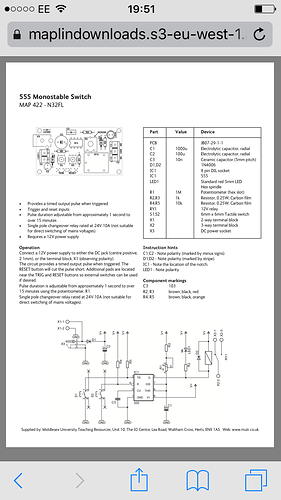