Cannot get uno wifi set up with Cayenne

In file included from C:\Users\John\Documents\Arduino\libraries\arduino_237773/CayenneWiFi101.h:24:0,

This report would have more information with
“Show verbose output during compilation”
option enabled in File → Preferences.

You need to install the Wifi101 library.

I think we should take a step back here and make sure we’re all discussing the same hardware:

Do you have and Arduino Uno with a Wifi 101 Shield
or is it the Arduino Uno WiFi board itself?

If it’s the latter, I would try to connect it like an ESP8266 rather than using that WiFi 101 sketch, since that board uses an ESP8266 for internet connectivity. We don’t have the ESP8266 in our Add Device GUI just yet, but plenty of people here are using them for projects. See this post for a primer on how to connect one.

No worries, I know it’s not quite as clean as picking menu options in our UI, and we plan to have it integrated there in the first quarter of this year. At that time it will have documentation, tutorials, everything else that the other microcontrollers have.

Certainly use us on the forum as a resource if you get stuck or have questions while connecting this device.

Hi @johnmcaveety I have Uno with Wifi built in too with Developer Edition, and I cannot connect to Cayenne, have you succeeded after reading the post which has been referred by @rsiegel?

I have some ideas. Upon further review, this requires a wifi library change (I think) as the board incorporates an I2C to UART expander so the debug port remains free for your programs.

I think we can make this work. Stay tuned. Maybe tonight I can throw together some instructions to try.

Hello, has there been any progress on this matter ? I have the same issue as initially mentionned in this thread. Thanks !

yes its possible. install cayenne MQTT library and you will find the example.

Hello, has there been any progress on this matter ? I have the same issue as initially mentionned in this thread. Thanks !
I can`t finde the arduino uno WiFi rev 2 in the dropboks…

can you try this code:

@ia_tiger did this work for you?

Some few faults in the code, but after a quick fix it seems to work,
se picture 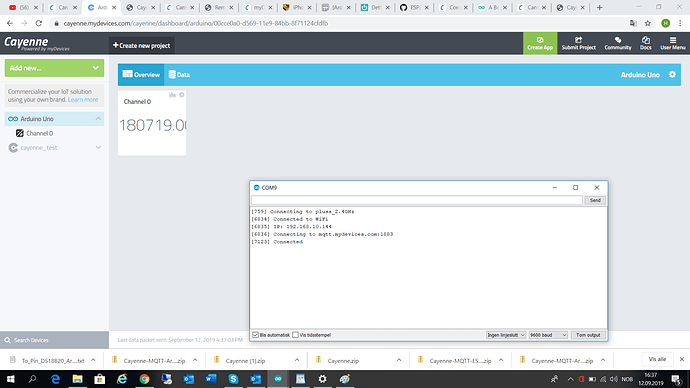 Hello,
i have the same issues with connecting the Arduino uno wifi to cayenne. I tried out the code you suggested but got this error while compyling:

exit status 1
CayenneMQTTMKR1010.h: No such file or directory

I checked that all libaries and boards are installed as you had adviced.

@aofxfond we are not currently supporting any mkr devices as there are many issue reported with the library for mkr.