The Sense Hat for Rasberry Pi is gaining in popularity. It is GPIO mounted. Will there be support for these sensors?

The HAT has includes the following sensors:
ST LSM9DS1 inertial measurement sensor which is a 3D accelerometer, 3D gyroscope and 3D magnetometer combined it gives you pitch, roll and yaw orientation.

ST LPS25H Barometric pressure and temperature sensor:which gives a measurement of air pressure in Pascals or Millibars as well as the temperature in centigrade.

Excellent to hear support for sense hat is coming :)grinning:

Seems as how this guy wandered into my stable last night, I too would like to see sense hat support.
Thanks, 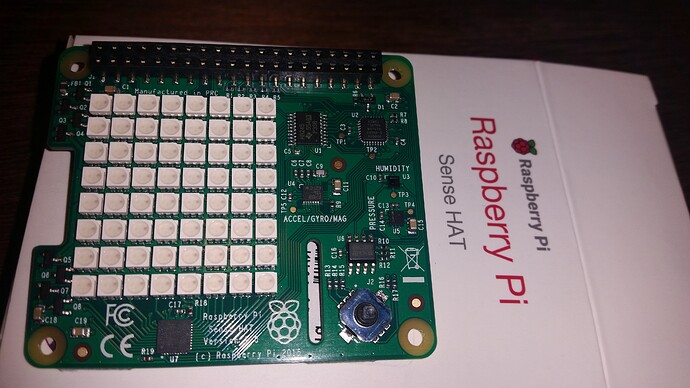 Just signed up and not started yet, I cannot see a SenseHAT device on there, how is this coming along?

It’s coming and on our roadmap. it’s just a matter of time and what devices we’d like to support before we integrate SenseHat…like Arduino

@bestes any updates on the timing of SenseHat support?

I would like to see this support as well. I am just getting started with Cayenne, and I’m less than thrilled that my main environmental sensor setup basically has nothing that works out of the box.

The draw of Cayenne is the simplification of building IoT software. To me, devices like the Sense Hat accomplish the same goal from the hardware perspective. Putting the two together should be like chocolate and peanut butter!

Totally agree with you. It’s on our roadmap, but behind a few other things. I have same thoughts as you about simplifying IoT hardware…I’d like to get out of box support for all the grove pi sensors too !

I joined Cayenne for its self publicised user friendly GUI further, hoping it supported Pi sense hat. Finding that the user interface is very easy to use but no sense hat has me jumping up and down… i will not stop jumping until i pass out or sense hat is supported here, help me… add sense hat as a priority! my sanity depends on it

I’d be nice if you guys had support for the UPS Pico also. I made a post concerning these two HAT’s but no one even bothered to reply

Yikes! Sorry it took some time to reply back to your post.

Bump, you’ve got to add the Sense HAT functionality. You’ll find it a gateway to a huge number of future users. Thanks in anticipation.

Another vote for the SenseHAT here. My guess is that the userbase might be larger than GrovePi sensors, but how to know? I do know that it’s a first stop HAT for many new users.

Sensehat support would be an awesome addition to Cayenne!

Would love to hear something about the Sense Hat support…its been over a year since it was mentioned being on the roadmap. I would be happy to donate, as I am sure others would as well, to help make this happen.

I would like to ad my vote to put priority in the Sense Hat support into cayenne.

What the deal with Sensehat support folks?