Hi, I am working on a project where I read an LDR with the NODEMCU ESP8266 board and I want to display the value on a Line Chart, I followed this tutorial Test Platform IoT Cayenne & ESP8266 NodeMCU in 5 minutes: PDAControl - YouTube , but I cannot figure out why my chart doesn’t display anything… also I do not have the “live” option to select… so, by default it is set to “h” and I have the message " No data available for this period ".th 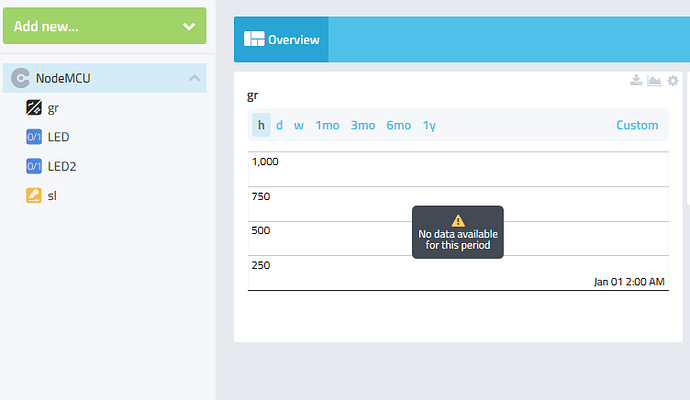 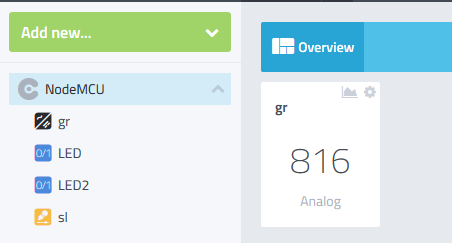 , also the control of the LED works, only the chart doesn’t work,.did somebody faced also this problem ? could you help me ?

Thank you in advance!

I know if an hour or week or month have not been recorded then you get that message. Not sure why live is not there, strange.

I do not have the Live option on my chart.

Are you using MQTT API? if so I found this on release notes:

Custom ranges for data history graphs are currently not working for MQTT and LoRa connected devices.
Server side slowness with MQTT and LoRa triggers/notifications.

Yes, I connected it via MQTT… I have seen some videos and tutorials where
the charts were working with MQTT, so I thought it will work also for me.

Once I have this issue with specific browser, because the browser engine was old. Can you restart the device and try with different devices?

It’s been a few months, is there any further word on this?

I too have this same problem. I have a Sparkfun Thing Dev board with three temperature sensors on it. The first one (channel 0) gets data and does have a chart data, but the other two (channel 1 and 2) don’t show values in the charts but the gauges do.

Here is my code

If it’s visible, my dashboard is here:

It’s possible that the values are being sent too fast. Try this:

Thanks, @adam - adding a delay there looks like it did the job. I’m going to let my Thing run a bit to ensure the data is collected but looking fine so far.

I’m also sending via MQTT from a custom device and I’m getting the same issues.

I’m sending a QoS1 publish, waiting for the acknowledge packet (which takes about 300mS), then I wait about 200mS before sending the next value. That seems quite slow to me. Is that still too fast for the line graphs to work?

For what it’s worth I ended up going with a 1000mS delay between packets, but then I only take three readings every 5 minutes so it’s not a big deal in my case.

I’ll tag @rsiegel but I’d say it probably is too fast. From what I’ve seen in the past the default rate to send values back to Cayenne was every 5-10 seconds. Cayenne is meant to be more of a general display of what’s going on rather than a this is the value at this very second kind of thing. To put it another way, hundreds of thousands to millions of devices sending packets faster than every 1 second uses a ton of bandwidth and processing power.

I would aim for 10+ seconds for sending data from any MQTT device. I don’t have any reason to say a feature like the line chart wouldn’t work with more frequent samples, just that our Engineering Manager said he would throttle people if they were sending data more than once a second.

That being said, about the line chart:

If you find one or more of your MQTT widgets in that state, it would help me to troubleshoot if you could try the steps in this post to extract the data that we have stored for that widget and shared with me at support@mydevices.com so I can investigate. Or PM me with your account credentials and a mention of the problem widget(s) and I’d be happy to extract/investigate myself.

Maybe my earlier post was misleading. I’m not sending data continuously at that rate. The fastest update period we would ever use would be 1 minute and probably every 10 minutes would be typical. However for each update we may send 3 or 4 different parameters and the timing figures I gave earlier represent the intervals between these parameters only.

It also seems strange to me that the instantaneous values one gauges etc, all update correctly. It’s just the line graphs which always report no data, regardless of how long I leave it.

Yeah, my impression is that the update rate for the device is wholly unrelated to any issues with populating the line chart. I just wanted to answer the question about expected publish rates.

Can you let me know what type (units, values) of data you’re sending to the widget(s) that are having trouble populating like this. I suspect it’s probably an issue on our back end and nothing you can resolve on your own, so I’d like to set up a reproduction case and investigate with our engineers.

Sure. I’ll email you at support@mydevices.com and give you access to one of our units which is just a test unit anyway.

Thanks for the email @mulder.roy, I think I’m much closer to why this is happening now, though I don’t have a fix just yet. 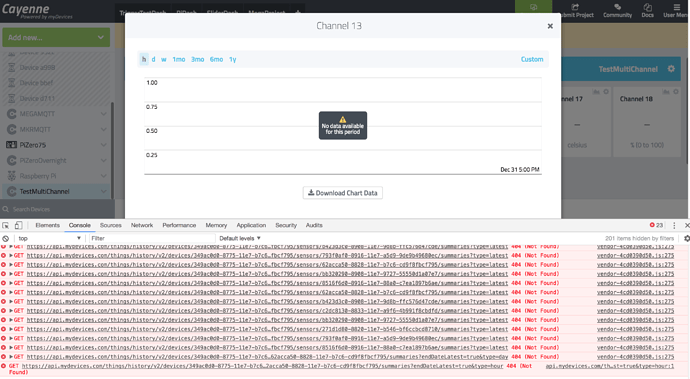 This at least explains pretty well that this is ultimately a data retrieval issue on our end and not some problem with the data send rate. I’ll investigate with our IT/Engineering why these 404’s might be occurring so we can ultimately put a stop to them. If anyone else is seeing empty line charts, I’d be curious if you’re seeing 404’s like this in the browser console (View > Developer > Javascript Console on Chrome)

I have found the same error message

Thanks for sharing this data @sidmarc12, we do have an engineer looking at this specific issue now, I’ll update as soon as we have more information.

I’m also having the same issue. I installed the Cayenne app on my Android device and the live chart appears to be working there. 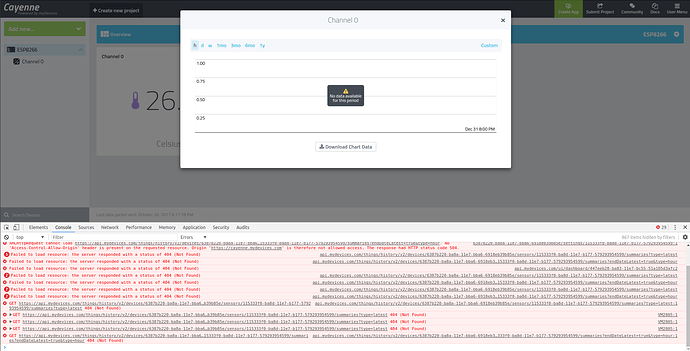 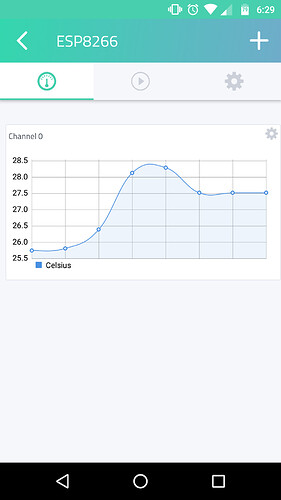 Edit:
Seems like suddenly It’s collected enough data to allow me to use the chart through the browser: