Thought I’d try a device that I could use triggers for so I installed a DS18B20 temp sensor and it’s working fine but when I go to create a trigger I get three additional control boxes that the examples in “Docs” don’t show and I have no idea what they are for therefore I don’t know how to set up the trigger using this device.

Until we expand our trigger UI to allow more complex logic, you’ll need two different rules. If I’m reading the requirement correctly then:

should do the trick, the 2nd one would turn off the heater at 60F, but the first one wouldn’t kick in until the room had cooled below 40F again.

In order to use the triggers UI, you need to drag and drop the parent device (like Raspberry Pi/Arduino/ESP8266) for each sensor/actuator into the IF/THEN boxes, then a dropdown menu should appear allowing you to pick the specific sensor/actuator from that parent device and set the thresholds I suggested above. The only other field to fill in is a trigger name, then it should allow you to save and use the trigger.

Here is an example from some test devices on my account: 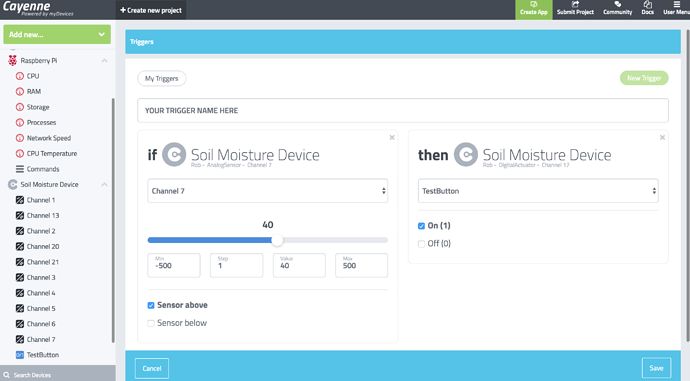 Note that ‘Soil Moisture Device’ is the parent device and I had to drag it from the left sidebar into each of the boxes to get the menus to appear – right now the UI doesn’t allow me to drag ‘Channel 7’ or ‘TestButton’ directly.

That’s how I do it on my hot tub also, I’d love to see a single trigger…hint hint! Would be great with pwm