The new agent brings the MQTT standard and we will extend it further, so it is the way forward. We are deprecating the old agent because it create a numerous issues in our servers, so it is difficult to continue support. So please understand it is not just that we don’t want to leave it available. Deprecating this agent will allow us to devote more time to further enhance the new agent and improve Cayenne with other features.

I understand and agree with you, but given the time constraint, it was a painful decision to make. The upside and intention with the new agent, and being a standard communication protocol, will allow us to avoid situations like this in the future.

Any news about the use of the camera?

@sergiohmo no news yet on camera, team is working on it, Till then you can try something like this Take picture when motion with Pi 3 and Agent 2.0 CayenneMQTTClient() and notify by email - how to trigger a script on Pi 3

One of the great virtues of the previous version was the programming of tasks … I hope they do not take long in this bug … it would be too much to ask to be able to program in fractions of time? in minutes?

are you referring to scheduler/event?

yes, actually it is not possible to program on and off any device by sheduling…

we will have scheduling feature fix in upcoming days.

I’m a new user to Cayenne so I’m not really sure if I understand exactly
what sensors/actuator will NOT now function with the new Raspberry Pi Agent 2.0.
For example is the BMP 180 temperature/pressure sensor included in this group.
Specifically I noticed that when trying to add a BMP 180 sensor, the only Pi listed that
that the sensor could be attached to had Agent 1.x and the Pis with Agent 2.X were not
even listed among the Pi to select.

It’s not as simple as clicking a button to add it right now. You can send the data from that sensor but you will have to code it yourself. I’ll see if I can find more info tomorrow to help you out, just wanted to let you know.

As adam said you need to do a bit of coding right now, first add the BMP180 to raspberry Overview | Using the BMP085/180 with Raspberry Pi or Beaglebone Black | Adafruit Learning System and get sensor reading. Then send it to cayenne using this code GitHub - myDevicesIoT/Cayenne-MQTT-Python: Python Library for Cayenne MQTT API

Thanks for the quick response to my question. At the moment I’m just trying to learn how to use Cayenne with various sensors/actuators that I hope to include in some future projects. For that reason it really is more important to me, that I only try those devices that are still supported in Agent 2.0. Is there any plan for a more detailed list of which of the devices described in the documentation are supported in Agent 2.0. In the absence of such a list, can I assume that if when I try to add a new device, and the system only displays the Raspberry Pi with Agent 1.x, that the device is NOT yet supported by 2.0.

In the absence of such a list, can I assume that if when I try to add a new device, and the system only displays the Raspberry Pi with Agent 1.x, that the device is NOT yet supported by 2.0.

Yes. but with cayenne python library, you can add any sensor you want.

@wolfman5 there are two BMP180 sensors, you can add the lower one directly to agent 2.0 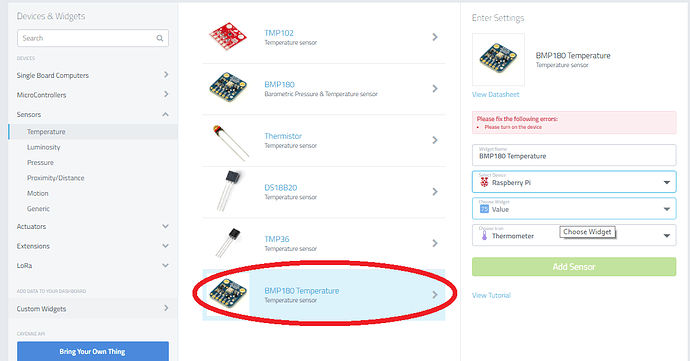 Tried the 2nd sensor and it worked perfectly. Thanks

Keep in mind that this sensor also reads barometric pressure. You would have add it as a new sensor under the pressure category. You’ll see 2 BMP180 listed as it was the case in the temperature category. Choose the one that only says “Barometric Pressure sensor”.

We will be fixing this confusion in a new update.

Hi! which Raspbian version should I use with this agent? With Agent 1 I was using 4.4.50 version, thanks