If you’re messing with cameras, check out OpenCV. http://opencv.org/

It is multi-core aware and thus very apropos for the Pi 3.

Thank you for the help! I was going through the instructions for install. When I came to the part about expanding the file system with sudo raspi-config and error message came up saying:

Your partition layout is not currently supported by this tool. You are probably using NOOBS, in which case your root filesystem is already expanded anyway.

I am using NOOBS, so I skipped that step and sudo reboot and sudo apt-get purge wolfram-engine (I have a lot of free space on my SD card.)

sudo apt-get install libjpeg-dev libtiff5-dev libjasper-dev libpng12-dev was as far as I could get because I got an error message about libjpeg-dev:

Did you have a similar problem when installing? Thank you for all your help!

Thanks! I have NOOBS on my Pi, so maybe that was an issue? When I was initially installing NOOBS with the pre-loaded Micro-SD card the only option was Raspbian, so I am kind of confused on which operating system I have!

I Googled the error and this Ubuntu forum page popped up. The final answer of the issue was sudo apt-get install --reinstall libjpeg-progs, which did not help me at all. Thank you for all your help!

I’d start from scratch with Jessie and go from there. You shouldn’t see any
problems.

Before I do anything major on the Pi 3, I’ll see how it works on the Pi B+ if I get the same problem. Should is skip sudo apt-get purge wolfram-engine this time? It seemed to me that it was only for clearing out space on the Pi’s memory. Thank you for your help!

Nice! I was thinking of that as an option for my microscope, but I already have bought an AmScope camera. It may be useful for the FoldScope, if you have one.

The OpenCV install worked for me using Python 2.7. I didn’t bother purging the Wolfram stuff either, but I’m running 16Gs baby.

Pro tip: Read the HowTo. Read it again. Then, when you think you understand it completely, create a new Jesse image and follow the process.

I’m really excited now to have some image functionality in Cayenne. A way to display a doped up image and measurements.

To me, computer vision and cloud computing is really one of those ‘Killer Apps’.

I can’t wait for camera integration.

This would be a very cool project to leave out at my dark sky acreage and control remotely by servos. 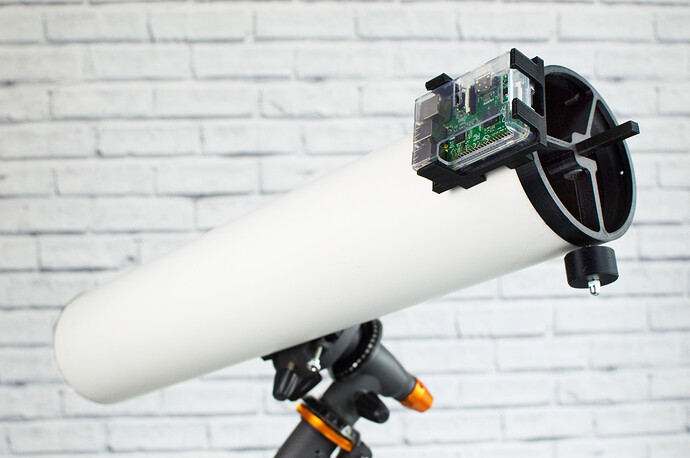 Gaze Across the Solar System with a 3D-Printed, Raspberry Pi Telescope

The PiKon telescope is an open source, 3D printed, Raspberry Pi telescope supported by a growing community of amateur scientists.

Just trying to push a little bit. What’s the current status of development in streaming Pi camera video via app or web interface? Any releasing date to be expected?

Hi @hai_baskar, we’re expecting the new Video widget in Q2 of this year.

Is the video widget is available now? I went through the widget lists, but I was unable to find one. It will be a very helpful widget in many cases.

Hi @souvicksaha95, and welcome to the Cayenne community!

Unfortunately this widget and several of the other ‘coming soon’ widgets have been delayed for other development priorities on the Cayenne platform. We’ll be sure to let you know in the Announcements section of the forum as soon as these are available, and will make an effort to bump old threads like this to notify here as well.

Hi there, i am rather new to cayenne and i was wondering if it is possible to collect a collection of photos taken over time to create a time lapse video. Also it would be awesome to then create a cursor and when moving through time, see the video but also all the logs updating…

Bump. I would love to see Camera widget implemented soon even if it is only the simplest of all possible implementations. Send a jpeg through MQTT to appear on the widget. I realize you are not going to please everyone in version one so just support the simplest use case to start.

I am waiting also for this widget. For now I just have a cronjob that takes picture every minute. Then I am making a good time-lapses videos

Are there any News regarding the Pi-Camera integration?
I was able to get a Rpi3 really cheap on Blackfriday and i would love to update my running project (Rpi2) with the new Rpi3 + perhaps a Camera modul.

slightly Off-Topic:
Or can someone perhaps recommend a specific approach how to intergrate/setup the Pi Camera the normal way in Raspbian?
(Take Video/Photo → Save to SD-Card)
I’m planning to shot 1-2 Photos every Day, so i can arrange them in a timelaps GIF or Video

such a great program, this is the only thing that is missing.

Any news on this?