Too Many Text Notifications: Message Buffer/Hysteresis

What dashboard are you using? (Web, iOS, Android)
All

Please describe the bug / issue. Attaching any relevant screenshots would be very helpful!

I have a TMP102 sensor and set up a trigger to send my phone a text message when the temperature reaches 85F.
Works fine, but I get between 5 and 7 text messages all in the same minute. Should only get one, don’t you think?

You are likely getting a message every time the sensor passes through the target temperature. As you can see in the trend below If I had the alert set for above 77.5°F I would get several alerts between 15:50:00 and 16:10:00 as the sensor reports temperatures above and below the set point.

These all come in in the same minute. If I was coding such a notification I’d put in some kind of buffering to prevent sending redundant text messages. I realize that this Cayenne thing is makeshift and has a long way to go before being really useful. I like the dashboard and it’s fun to turn a lamp on from my phone but I’m using python to actually do things with my sensor data. 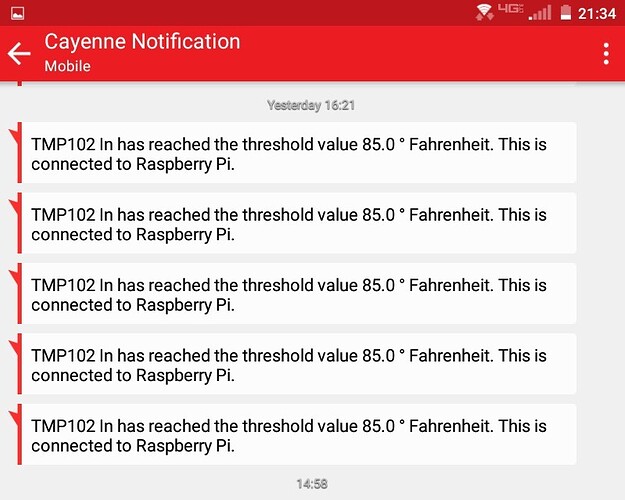 If I was coding such a notification I’d put in some kind of buffering to prevent sending redundant text messages.

K,
That is exactly how we the users implement change to the way Cayenne works, by bringing ideas to the table.

I like the idea of a message buffer on the notifications. How would you set it up? Something like an option box that said 'Don’t send the same message more than once every- 1 minute, 5 minutes, 15 minutes, …

Do you mind if I move this to the Ideas / Suggestions group?

By the way, welcome to the Cayenne Community!

Ian,
I will piggy-back on this suggestion. I set up a trigger last night for my DS18B20 when temp below 81F. At the remote location it apparently hit this at 0406 and I got text messages every 30-60 seconds until 0441, then starting at 0514 until 0515, then starting 0605 until 0617, when I edited the trigger to “when below 15F” (not likely in home in FL). I tried just turning off the trigger and the text messages didn’t stop. Then I rebooted the remote Pi with trigger still turned off - no joy. The messages only stopped after I changed the parameter. So at a minimum I suggest a yes/no choice on the Repeat message, then If YES a choice of every 15, 30, etc. – if condition still met of course. I could then set a second trigger - say if TEMP drops to 79F (in my example) which would tell me the condition was escalating. I thus might get useful information about trend in 30-60 minutes, maybe with the two different messages - as condition escalates.Also, don’t know why the texts didn’t stop immediately when I toggled the trigger off from remote device. The trigger grayed-out appropriately but messages kept coming.
This issue also ties into the request I saw elsewhere here for a hysteresis or “dwell” setting on parameters, but particularly TEMP as all commercial thermostats have this.
btw - I love the work you guys are doing with Cayenne in general!

I love that these are all things we deal with in our SCADA system every day.

Like, there should be a configurable delay before a trigger condition is set. So if we are over 85 degrees for 10 seconds, then alarm, BUT once triggered, don’t clear the alarm until temperature drops below 80 degrees.

Yes, I requested the hysteresis option for sensors. This is a good example of why it is required. It has many applications, not just stopping lots of messages as a sensor reports say temperature on the threshold you have set. It is quite likely that a sensor will toggle between 80 and 81 degrees as the temperature increases through the threshold.

So again here the hysteresis makes sense where you would do something like send a message the first time the temperature reads 81, then only reset that condition once the temperature is below say 78.

As I said in another post. A good example is say filling a tank with water by controlling a pump. Start the pump once the tank reaches 75%, stop once it reaches 100%. Setting it to 100% with no hysteresis will result in the pump starting for very short times or create a “chattering” type concept.

This one simple feature change will significantly improve this product to become something really handy for many applications. The code can simply be mirrored across most sensor applications, fluid level, temperature, pressure, weight, etc, etc…

Speaking of tank fills though, it actually makes sense to integrate an algorithm, to ‘wash’ around a line.

This helps prevent a scum line.